Elden Ring: Should I play it?

Patrick_Yu
May 2022 edited January 18 in Gaming 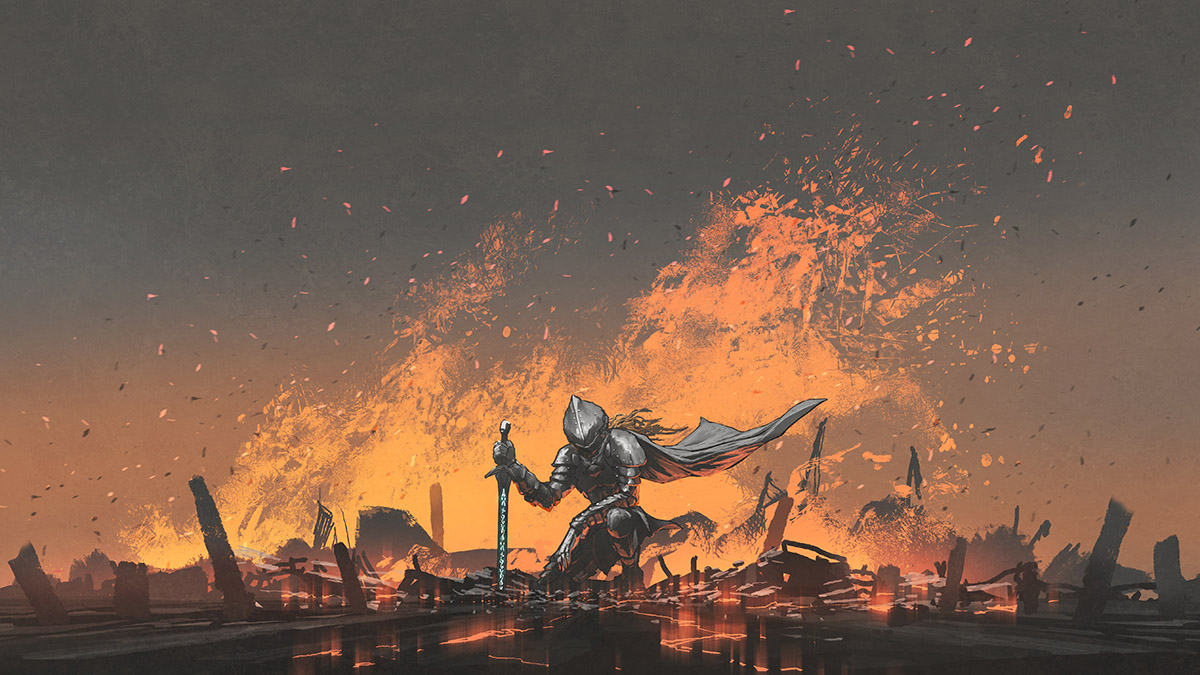 Elden Ring's hype is huge, with countless reviews, YouTube videos, and Twitter threads. Since its March release, most agree it's beautiful, absorbing, stunning, but intimidating.

For many hardcore gamers, Elden Ring is a masterpiece. It's a game of the year contender with a 95% score on PC Metacritic. Some reviewers went even further, giving the game a perfect score. But it's not for everyone.

Known for its dark and challenging RPG games, Elden Ring is a brand-new video game by Japanese developer FromSoftware. It will be recognizable if you've played any games, including:

Over time, these games became a subgenre called Soulslike. Soulslike games are notorious for their difficulty and unforgiving nature, requiring more precision, patience, and reflexes than your average RPG. You can't mash buttons and force your way to victory.

The games are punishing. A moment's lapse in concentration can prove fatal in even the simplest encounter. The game's difficulty is a feature, not a bug, as FromSoftware game creator Hidetaka Miyazaki recently told The New Yorker:

"..hardship is what gives meaning to the experience. So it's not something we're willing to abandon at the moment. It's our identity."

Elden Ring is the next evolution in gameplay. An action RPG set in a place known as The Lands Between. The game is the pinnacle of Hidetaka Miyazaki and the FromSoft games universe. It combines the game mechanics, familiar gameplay, and monsters of Soulslike but is more accessible to new players.

Elden Ring follows the FromSoftware formula. Like other Soulslike titles, the game doesn't have difficulty levels. So, it can feel impenetrable to newcomers. But, this time, there's a twist. Elden Ring ditches the linear progression of Dark Souls in favor of a massive open world for players to explore as they please.

What is Elden Ring?

Elden Ring is a dark fantasy action RPG game set in a massive open world called The Lands Between. A world of European medieval architecture and Japanese folklore destroyed by The Shattering, a war caused by the shattering of the Elden Ring. You enter as a "Tarnished" tasked with restoring the Ring and becoming ruler of a new world.

Your character is one of ten classes, each with its own story and unique abilities. Your starting class and stats determine the equipment or spells you can use early on. Over time, you'll invest points in your attributes and level up.

Game of Thrones author George R.R. Martin collaborated to create the game's mythology. You explore a vast realm filled with castles, caves, and spooky dungeons. There are strange animals, enemies who want to kill you, and plenty of cryptic secrets that inhabit this world. The game leaves the decision to engage with its story up to you.

How is Elden Ring Different from Dark Souls?

Elden Ring is the first actual open-world title in the Souls genre. While you'll die more than in other RPG games, now you can explore rather than fight only brutal, stronger foes. The game demands curiosity if you want to learn more; it will give you nothing in return if you aren't.

Another significant change is horse riding. Early in the game, you'll find a horse and can move quickly through the absolute vastness of The Lands Between. With faster movement, you can escape if an enemy above your level attacks you.

Like Sekiro, your character can jump, allowing you to use jumping attacks and search for discoveries. Also, Elden Ring borrowed stealth from Sekiro. You can hide and ambush enemies silently, making the world less hostile.

Death isn't as painful in Elden Ring. When you die, you'll lose all your currency. But if you get back to where you died without dying again, you can pick them up again. Elden Ring has many checkpoints that serve as respawn points when you die, fast travel, and a horse to ride. So, it's still challenging but less unfair than its predecessors.

Can I play Elden Ring without Playing Dark Souls?

Yes. Elden Ring is a stand-alone game. There isn't a story link between the two games.

But, Playing Dark Souls will help you with tackling Elden Ring. The combat system is almost identical, and the gameplay is similar.

New players unfamiliar with Soulslike games might find it challenging to cope with formidable enemies' unforgiving nature. Yet, subtle changes make it more welcoming for beginners. Now you can run from the fight without consequences. Come back with better weapons and experience to crush your foe. Frequent save-points and fast travel helps will help ease you into the challenge.

Is Elden Ring going to be hard?

Yes - it's not a game you can easily breeze through. Elden Ring plays like all Hidetaka Miyazaki games requiring patience, time, and skill.

At the beginning of most games, you can choose the difficulty level. But, FromSoftware creates games without a difficulty setting. The game is the same for everyone, challenging and rewarding at the same time.

The game is exacting and uncompromising. You will die a lot and have to start over many times. You will learn patience. The struggle is part of the gameplay.

Elden Ring has a lot of complex systems, which you must research to understand. Unlike other RPGs, there isn't a journal with quests. Information is scattered and hard to come by. Luckily, there are online communities and guides to help you.

While it's mostly one player, you can call for help from players online to win critical battles. The game erects small statues in challenging areas as summoning posts to bring in another player. Once the mission is complete, the player disappears. Another mode, online Player versus Player (PvP), is where players can challenge and fight others.

Different players will have different reactions to the difficulty. For some players, slowly unraveling the endless mysteries is fantastic. For others, a missing critical item that the game didn't explain leads to frustration.

Elden Ring is more playable than previous titles like Demon Souls or Dark Souls. Rookies to the Soulslike RPG subgenre will find the game challenging. But, Elden Ring has changed the core gameplay to make the game more enjoyable for all players.

Almost every part of The Lands Between has an incredible depth. The freedom to explore makes the game more enjoyable as you can wander for countless hours through the unforgiving realm.

How long does Elden Ring take to finish?

Speedrun aside, the game's length depends on how you approach Elden Ring. Experienced players can finish the game within 50 hours of gameplay. But, most gamers need over 60 hours, and you can easily notch 100+ hours exploring the diverse landscape and engaging in side quests.

After beating the game for the first time, New Game Plus (NG+) is the next step. In NG+ mode, you can start your journey from the beginning, complete with most of your items, your gained levels, and the map you've uncovered.

You can choose different classes. You can melee your way through The Lands Between and then try to do it again with magic.

If you don't want to die constantly, the gameplay requires you to remember what you're doing. You'll need to focus and track your progress by recalling details or making notes. So, skip if you play games to relax or tune out.

It's a game that requires patience and intuitiveness. You'll need to be methodical and deliberate. You learn an enemy's patterns by watching and attacking when it's safe. Learn to run away when outmatched. People compare it to learning to play a musical instrument.

As a result, Elden Ring requires uninterrupted play, for which many people don't have the time. If you only have time to play games for an hour or so, there are better choices.

Should I Play Elden Ring?

The game's a revelation if you've struggled with the rigidity of the Dark Souls titles. It invites you into the subgenre with its new gameplay mechanics - the open map is densely packed and alive. New players can explore and battle in a style that matches them best, making this the most accessible of the Soulsborne series.

Dark Souls enthusiasts should play. Besides familiar gameplay and tough opponents, you will get a Skyrim-like open-world setting to explore.

Finally, Elden Ring is worth the money if you want near-endless options. Depending on your style, the game offers hundreds of hours of gameplay without repetitive scenery and enemies.

Elden Ring is available on PC, PlayStation, and Xbox.

The minimum PC requirements are:

The recommended specs for the game are:

Acer Predator Triton 500 SEE is one of the best laptops available with those specs with its Intel® Core™ i9-12900H CPU and high-end graphics cards like GeForce RTX™ 3060Ti, 3070 Ti to 3080 Ti. It will play the game smoothly with great details.

You will also get an RGB backlight keyboard and a high refresh rate screen.

Dark Souls fans will feel at home because of the challenging combats. New players will appreciate the vast open world full of secrets and regions to explore.

The key to enjoying this game might just be a little help and a bit of patience. Some tweaks in the Soulslike formula accompanied by the vast open world make Elden Ring a must-play action RPG game. So arm yourself with patience, and dive into the vastness of the astonishing design of The Lands Between.